Metallica "Death Magnetic" - Vinyl sounds better than CD. But not much. 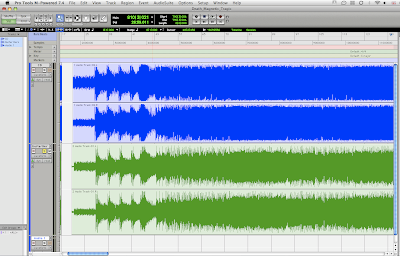 To cut a long story short:
The vinyl LPs of "DeathMagnetic" sound better than the CD release.
Not by a huge margin - they were clearly made from the same, heavily distorted original mixes, but despite this they sound a little more real, more dynamic, more spacious and (yes, really!) more exciting.
That's the good news. The bad news is that the difference isn't that huge, and not all the tracks sound much better - there is more difference on some than on others. And also, the versions I listened to are the $100 5-LP set. So not only do you need a turntable to listen to them, but they aren't cheap.
There are however several fascinating questions which are raised by this, of which the most controversial is:
Did the CD mastering actually make the sound worse ?
Of course "worse" is a subjective term, but I'll explain what I'm hearing in more detail below.
What makes Death Magnetic (on CD) sound the way it does
There are three major factors that contribute to the overall sound of the Death Magnetic CD:
Or rather, it wasn't possible (for me, at least) until now.
Why listen to the vinyl ?
There has been discussion from the outset on the Metallica forums and elsewhere that perhaps the vinyl release would sound better than the CD. This doesn't rely on any purist audiophile belief that vinyl is better per se, but simply stems from the fact that vinyl releases are typically mastered separately from the CD versions, partly to take into account the pros and cons of each format, and partly because engineers often specialise.
This means there is scope for a vinyl version to sound different:
This last possibility was the one that had the fans really excited, but it was quickly established that it wasn't the case - the crackly analogue-sounding distortion was on the vinyl, too. At this point most people lost interest, and in fact many commented bitterly on the fact that the much-touted "audiophile" release, pressed on limited edition heavy vinyl at 45rpm for the best possible quality, suffered all the problems of the vanilla CD.
However as time went on, several people started saying that the vinyl was better in some ways, even though the distortion was still there. One chose to send me a couple of high-quality FLAC extracts to listen to, to get my opinion of them.
How does the vinyl sound ?
My first move was to listen to the same track I've used in my other comparisons - "The Day That Never Comes". I quickly established that indeed, the same mushy distortion covered the mix as the CD version. However discussion on the forums mentioned that different tracks sounded better than others, so next I chose one they highlighted as sounding clearly better - "All Nightmare Long". Before listening I used AudioLeak to calculate the long-term RMS loudness of both files, and reduced the CD version by 3.6 dB to match them. Comparisons without matched levels are highly unreliable. (The A-weighted values suggested a 5dB difference, but the CD sounded unfairly quiet to me at this level.)
After loading them up to ProTools, instantly I could hear a difference, even though I was just listening at home on headphones. Both were crunchy and distorted, but the vinyl version had more "punch", more weight in the drums, and the bass was clearer and more defined - even though the mix overall had less bottom end in it, the notes were more clearly audible. This was especially obvious during the more "full-on" sections, where the CD version suffered noticeably in comparison. After listening a little longer, I found I had a strong preference for the vinyl version.
Returning to "The Day That Never Comes", I can hear the same difference, and draw the same conclusions, although the distortion from the original mix is so extreme it doesn't jump out at you in quite the same way. In comparison the CD sounds flat and lifeless. I'm still not keen on the distortion, but of the two versions I would choose the vinyl to listen to.
The difference between the vinyl and CD
Waveforms aren't proof in cases like these - there are lots of reasons the vinyl might look different. In fact though, they are remarkably similar. Having looked at the waveforms of the CD before, I was pretty sure of what I would find, but zooming in on the waveform confirmed my suspicions. 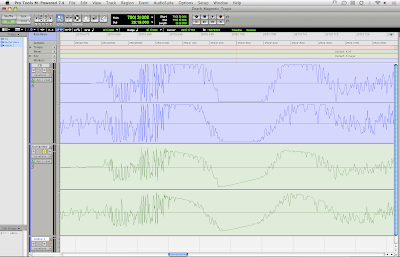 The upper (CD) waveform is digitally clipped or "squared off", as expected, but the unexpected part is the vinyl version - it's a very unusual, unnatural shape because of the distortion, but it's not squared off. This explains why the vinyl sounds better - although harsh, the analogue distortion hasn't completely removed all the remaining dynamics. Extreme digital clipping of this kind on the other hand, where the whole wave becomes almost square, obliterates pitch information - the ear can't resolve the original fundamental or it's harmonics. Impact and punch are lost, too - the result sounds two-dimensional and plastic in comparison.
Some people on the Metallica forums expressed the opinion that the extra "peak" information on the vinyl didn't represent "real" musical information, simply the inherent difference in the format. Initially, I was inclined to agree, but after doing these listening tests myself I don't agree - the vinyl is less clipped than the CD and sounds better as a result.
Put another way: True, we are only talking about 3-4 dB extra dynamic range. But most of the CD tracks have a "loudness range" of only 3dB RMS anyway. So the vinyl has roughly twice the loudness range of the CD.
More questions
There are various differences between the vinyl and CD versions, as I would expect of two different masters for different formats. The CD sounds slightly thicker and fuller, without quite as much edge, and perhaps slightly more compressed. However the most noticeable difference is in the levels - there is 3.6 dB RMS between the vinyl and CD versions, even though both are peaking at full digital level. This means someone somewhere decided to boost the CD version by a further 3.6 dB, and digitally clip it in the process. (It's possible a digital limiter might have been used, but it looks like a straight clip.)
The question is who, and why ? The RMS measurement of of the vinyl version is -8.5, which is right at the top end of the loudest you can go without damaging the sound, and it already has the harsh, aggressive, distorted sound it seems that Rick Rubin wanted. So as a mastering engineer, I would see no reason to boost it further - simply balancing the EQ and levels of the tracks would be fine, and I'm sure Ted Jensen would have the same opinion.
So, were the files supplied to Sterling Sound already clipped ? Ted says they were "already brickwalled" - does he mean in a digital sense, as well as the analogue distortion ? Or, was he pushed to make the CDs even louder than the mixes, to the detriment of the sound ? He says he "would never be pushed to overdrive things as far as they are here". In which case, were the files that were supplied for CD mastering clipped more than the ones used for the vinyl ? If so, why ? There seems to be no logical reason for doing that, at all. Perhaps new, cleaner files were supplied for the vinyl cut in response to the unfavourable public reaction to the CDs ?
(Edit - I have been told the CD and vinyl versions were released simultaneously, in which case this last suggestion doesn't hold water.)
Either way, it's a shame the CDs ended up this way - the clipping isn't enough on it's own to ruin the music, but in my opinion in the unfortunate case of "Death Magnetic", it really is the straw that breaks the camel's back.
Now, I wonder what the downloadable mp3 versions sound like...!
ianshepherd at 15:05